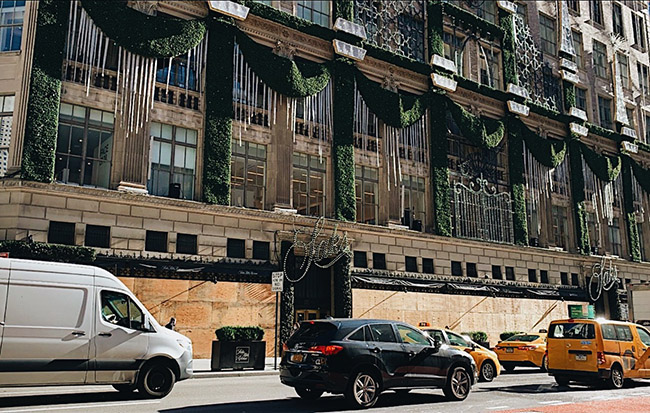 Several journalism students reached out to friends and family and people within six degrees of separation to gauge the mood in the final days and hours of a most contentious election in a most difficult time. Here’s what they found:

Despite relentless rain and low temperatures, New Yorkers stood in lines for hours last week to cast their 2020 ballots early.  Early voting began on October 24 and ended on November 1. At some locations, lines wrapped around the block and voters waited for several hours in the cold and wet.

In spite of the weather, early voters were determined to get their ballots in. Some voters encountered no lines; others waited for 50 to 90 minutes.

When asked how they had felt waiting in line, two voters who each waited for more than an hour said, “Cold.” Another responded, “Alert and ready to move the national conversation forward.”

“It was generally positive and hopeful,” said one voter, Mike, 35, who waited for three hours.

Daniel, 33, had a similar experience. “It was pretty upbeat, only heard one person complaining,” he said. “There were volunteers giving out water, chips, and sandwiches.”

The contentious nature of this particular election means voters have a variety of reasons for wanting to vote so early. Some, like Mike, say they always vote in every election, local or national, and simply wanted to avoid COVID-19. But for others, this election was too important to risk not being able to vote in.

“The integrity of our country is at stake,” said one voter.

Another said, “I would us to remain a democracy.”

Others plainly stated their reasoning being, with some expletives, Donald Trump.

In the end, more than 1.1 million New Yorkers cast their ballots during the early voting period.

The anxiety and stress levels of the average America are running high with the uncertainty around the election on top of the Covid chaos.

Michele Dabney, 53, mother of two and California resident, explained her need to get out of the house and go for walks to distract herself from the state of our country and lives.

“We are all so disconnected and torn apart as a nation,” she said. She  worried that “the aftermath of either decision will be chaotic, but the amount of anger riled up in people, can be and will be extremely concerning.”

Feeling the high stress levels as well is New York University student, Olivia Ebner, 20, who notes how this is unlike any election in our history. She mentioned that  social media sites are now applying a warning if either candidate claims they have won prematurely.

“There is a good chance Trump is going to announce he won before all the votes are counted,” Ebner said. She fears him threatening to refuse the result of the election. “This is insane,” she said. “In our constitution it literally says it must be a peaceful transfer of power, no other president has ever threatened this.”   —By Julia Wiggs

The coronavirus pandemic and the Trump presidency that preoccupied the United States and much of the world this year have finally met face to face today.

We asked some local residents to share their thoughst on this Election Day:

“This election, for me, is an easy choice. I would vote for Donald Duck over Donald Trump. I want to remove a president who threatens our democracy. And because of that I’m not just voting against Trump, I’m voting for his opponent.”

“As a journalist for over 30 years, I cringe at Trump’s and the way he looks down on the media, and his unending refrain that any media coverage with which he disagrees is ‘fake news.’ The media has its challenges, and there are legitimate concerns with fabricated fictions being passed off as news. But the many people I know in the media world are universally devoted to helping readers, listeners, and viewers understand the world around them better.”

“I don’t believe Donald Trump is racist. I wouldn’t be voting for him if I believed he was racist. This year, I’m proudly voting for him based on the promises he’s kept and the leadership he’s shown over the last three and a half years. In fact, a majority of voters say they’re better off now than they were four years ago, even after eight months of a pandemic.”

“The choice is between two different Americas. The question is, which America do you want your kids to grow up in?”   –By Bielka Aime

Fearing the aftermath of today’s election results, New York City is closing up and some residents are taking shelter in their homes. Streets are quiet now while building windows are being boarded up.

“I’m not leaving my apartment because New York is the root for so much of what happens in America,” says Lindsay Dievert, a freshman at New York University. “And no matter the outcome, there will be violence.”

The recent protests and riots that have been taking place across the entirety of America have instilled more alarm in the people. “Especially with what’s been happening the past few months, I don’t want to risk getting caught in the violence,” says Bill Hoffman, a New York University sophomore. “People aren’t scared to express their feelings, and the election response is only going to further that fearlessness.”   —By Rachel Nazar