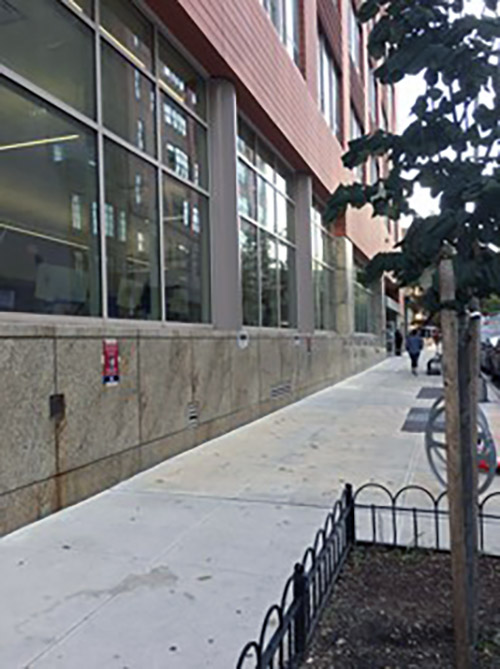 75 Morton Street, New York, NY at 9 am on November, 3, 2020. Signs posted to indicate where people line up to vote, prepared for a line around the block.

On a typical Tuesday morning, elementary school kids and their parents line up outside 75 Morton Street in the West Village. However, this morning, there was no line, just bitter wind chilling arriving polling volunteers and a steady trickle of voters.

Alex Niejelow and his wife exited the polling station just after 9 a.m., arm-in-arm and zipping up their jackets to brace the icy winds. To show how he cast his vote,  Niejelow unzipped his hoodie to reveal a Biden/ Harris shirt. A Biden win means that America could begin, “getting back to who we are, trying harder, and getting better,” he said.

Niejelow was both excited and anxious for the election. Excitement came from his assurance in Biden’s victory, but anxiety came from a fear of possible rioting in the aftermath of the election. Some people at the polls were less inclined to believe that civil strife would undoubtedly occur after the election.

Alan Lawrence, who exited the polling station shortly after 9:30 a.m., was on his way to make a work call but had extra time to hit the grocery store because of the center’s unexpected organization. “I was expecting a line and at least a 30-minute wait,” he said.

Lawrence’s reason for voting on election day was out of habit rather than passion for either candidate.

Other voters included Bernie Sanders supporters Celine and Noah Sutter. Both ended up phone banking and voting for Biden in the end.

“This is the most important election of our lifetime,” said Noah Sutter. “One candidate stands for hate, discrimination, and xenophobia. The other represents something more professional and official.”

Celine Sutter was not as enthusiastic for a Biden win as she was for a Trump loss.

“Biden is the tool for which I defeat Trump,” she said. And her overall mood reflected that of other voters leaving the polling place this morning. “These feel like the last hours of normalcy as prolonged uncertainty approaches,” she said.