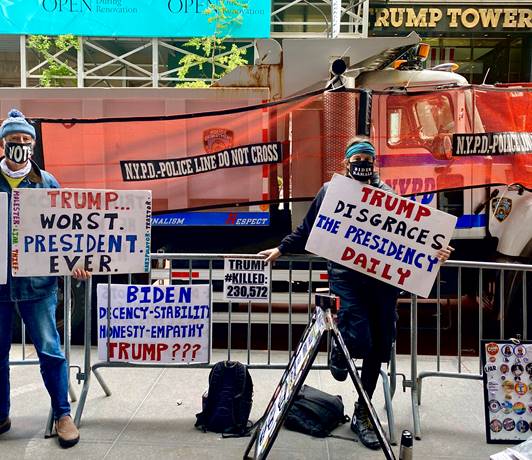 Paul Carnee and his friends protest in front of the Trump Tower despite NYPD barriers. They have been protesting here for years. Photo by Emily Welsch

On the outskirts of Central Park, the engine of a bright yellow Halal cart hums and a man on a scooter is first in line for the famous chicken-over-rice.  On Election Day, the food trucks are one of the few signs of normalcy in the city.

Businesses throughout the city are boarding up their windows and doors in anticipation of riots. Protestors are gearing up with masks and posters. Reporters are lining the streets with microphones and heavy cameras. Times Square looks post-apocalyptic with dozens of police cars and extensive metal fencing. 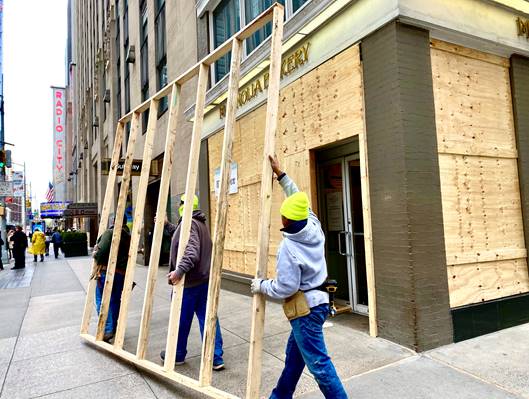 A Times Square area bakery is boarded in anticipation of Election night rioting.

While city braces for unrest, Election Day brings a familiar routine for Paul Carnee and his friends. For four years, Carnee, 71, has been protesting the administration on the street across the Trump Tower. He’s unconcerned for his safety this day as on others. “It’s because we think we’re invincible even though we’re old,” he said with a laugh.  Although he gets into dozens of verbal disputes per day, he does not fear Trump supporters. His friend points to a brown stain on his sign, where a Trump supporter once hurled their hot coffee.

Carnee is confident that Biden will win, but worries about the volatility of swing states.  “No matter who wins, there’s going to be places in the country that are going to explode.”

On a bench in Central Park, Danny, 31, (who asked not to use his last name) expresses his anxiety.

“There’s a tension in the air,” he said. He voted in the morning and will avoid all social media and news until later in the evening. In the past, he’s been disengaged from politics, but sitting out this year was not an option for him. “This year, apathy is a political choice in itself,” he said. 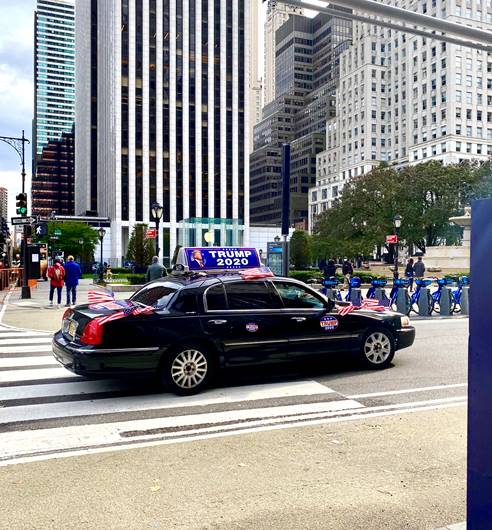 A “Trump 2020” flag-bedazzled car honks through the streets of Midtown. NYC is a historically blue leaning city, nonetheless, Trump supporters are eager to make themselves heard.

Married retirees Sarah and Abraham (who preferred not to use their last name) just returned from the polls as well. They describe their voting experience as smooth and trouble-free. The couple voted for Trump despite their overtly liberal anti-Trump neighbors. “I try to be quiet because I don’t want to quarrel with anybody; politics is not my thing,” says Sarah. She explains that as a Christian, she feels that the Trump administration advocates for her beliefs more than the Democratic Party. “It’s not that I love Trump or what he does, but he protects Christian people.”

The pair isn’t worried about violent conflict on a state or civil scale; they are more concerned about retaliation from their anti-Trump acquaintances.